New observations of the red supergiant suggest that the 2019 mass ejection of its atmosphere might significantly affects its fate. This doesn't mean Betelgeuse is going to explode any time soon, but the late-life convulsions yield clues as to how red stars lose mass late in their lives as their nuclear fusion furnaces burn out, before exploding as supernovae. The results were obtained with multiple observatories, including NASA’s Hubble space telescope and the robotic STELLA telescopes of the Leibniz Institute for Astrophysics Potsdam (AIP).

The star Betelgeuse appears as a brilliant, ruby-red, twinkling spot of light in the upper right shoulder of the constellation Orion. This aging star is classified as a supergiant because it has swelled up to an astonishing diameter of approximately 1 billion miles. If placed at the centre of our solar system it would reach out to the orbit of Jupiter.

Analysing data from Hubble, STELLA and several other observatories, astronomers have concluded that Betelgeuse quite literally blew its top in 2019, losing a substantial part of its visible surface and producing a gigantic Surface Mass Ejection (SME). Our Sun routinely blows off parts of its tenuous outer atmosphere, the corona, in an event known as a Coronal Mass Ejection (CME). In comparison, the Betelgeuse SME blasted off a whopping 400 billion times as much mass.

The first clue came when the star mysteriously darkened in late 2019. Astronomers pieced together a scenario for the upheaval: The titanic outburst was possibly caused by a convective plume, more than a million miles across, bubbling up from deep inside the star. It produced shocks and pulsations that blasted off the chunk of the photosphere leaving the star with a large cool surface area under the dust cloud that was produced by the cooling piece of photosphere.

Weighing roughly several times as much as our Moon, the fractured piece of photosphere sped off into space and cooled to form a dust cloud that blocked light from the star as seen by Earth observers. The dimming, which began in late 2019 and lasted for a few months, was easily noticeable even by backyard observers watching the star change brightness, as Betelgeuse is one of the brightest stars in the sky.

And the star is slowly recovering; the photosphere is rebuilding itself. The interior is reverberating like a bell that has been hit with a sledgehammer, disrupting the star’s normal cycle: the supergiant's 400-day pulsation rate is now gone, perhaps at least temporarily. For almost 200 years astronomers have measured this rhythm as evident in changes in Betelgeuse's brightness variations and surface motions.

The AIP team has observed Betelgeuse with the STELLA telescope now for more than a decade on a nightly basis. “Such a sampling is only possible because of the robotic design and operation of STELLA, still a unique facility,” said the AIP team leader and director of the research area Cosmic Magnetic Fields, Professor Klaus Strassmeier. Dr. Thomas Granzer, head of the Telescope Control and Robotics section, adds: “Measuring Betelgeuse’s radial velocity, which is the speed of the photosphere approaching towards us or receding from us, the AIP team could show that the pulsation of the star slowly gained in amplitude, until enough kinetic energy has built up and the outer layer of Betelgeuse could be expelled. This happened just prior to the great dimming and thus supports the picture of a huge CME leading to a dust cloud that was responsible for the light decrease. Currently, we see a tiny rebuilding of the oscillations, but at twice the frequency the main pulsation showed. Like in a string instrument, we expect this transient response to eventually give way to the familiar pulsation rate, at a period of around 400 days.”

The disruption of the star’s pulsation attests to the ferocity of the blowout. The star's ultimate fate is to explode as a supernova. When that eventually happens, it will be briefly visible in the daytime sky from Earth. Though our Sun has coronal mass ejections that blow off small pieces of the outer atmosphere, astronomers have never witnessed such a large amount of a star's visible surface get blasted into space. Therefore, surface mass ejections and coronal mass ejections may be different events. 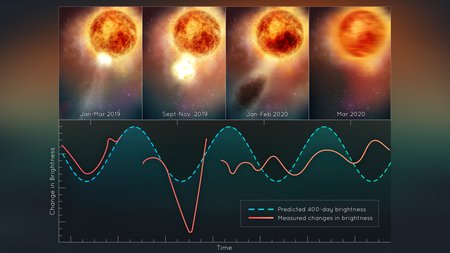 This illustration plots changes in the brightness of the red supergiant star Betelgeuse, following the titanic mass ejection of a large piece of its visible surface. The escaping material cooled to form a cloud of dust that temporarily made the star look dimmer, as seen from Earth. This unprecedented stellar convulsion disrupted the monster star’s 400-day-long oscillation period that astronomers had measured for more than 200 years. The interior may now be jiggling like a plate of gelatin dessert.