Cosmic dance: A solution to the Galactic bar paradox

Aug. 25, 2020 // The very heart of our Milky Way harbours a large bar-like structure of stars whose size and rotational speed have been strongly contested in the last years. A new study has found an elegant solution to the discrepancies found in different observational studies, using the fact that the bar and spiral arms move at different rotational velocities, encountering each other about every 80 Million years. As the faster-rotating bar approaches a spiral arm, it appears to be much longer and their ongoing mutual attraction due to gravity periodically varies both their rotational speeds.

While studies of the motions of stars near the Sun suggest the bar is small and rapidly rotating, direct observations of the Galactic central region find it to be significantly longer and slower. An international team of scientists led by Tariq Hilmi of the University of Surrey and Ivan Minchev of the Leibniz Institute for Astrophysics Potsdam (AIP) has found a solution to this apparent discrepancy. The team looked at the most recent stages of the Milky Way evolution. Analysing state-of-the-art galaxy formation simulations of the Milky Way, the scientists now showed that both the bar’s size and its rotational speed fluctuate in time, causing the bar to appear up to twice as long and 20 percent faster at certain times.

These bar pulsations result from its regular encounters with the Galactic spiral arms, in what can be described as a “cosmic dance”. Spiral arms are density waves within our Galaxy and move at a similar velocity as the Sun. A full rotation around the center of the Milky Way takes about 220 million years, while the central bar needs only about 60 million years. As the faster rotating bar approaches a spiral arm, their mutual attraction due to gravity makes the bar slow down and the spiral arm speed up. Once connected, the two structures move as one and the bar appears much longer than it actually is. As the dancers split apart, the bar speeds up while the spiral arm slows back down.

“The controversy of the Galactic bar found in observational studies can be simply resolved if we happen to be living at a time when the bar and spiral arms are connected, giving the illusion of a large and slow bar, while the motion of stars near the Sun is governed by the bar’s true, much smaller size,” says Ivan Minchev. Indeed, recent observations have shown that the inner Milky Way spiral arm is in fact connected to the bar.

The majority of spiral galaxies like our Milky Way host a large bar in their center. The gravitational pull of this Galactic bar shapes the stellar orbits not just near it, but all the way to our Sun and beyond. Knowledge of the true bar size and rotational speed is crucial for understanding how our Galaxy formed and evolved, as well as how galaxies form bars throughout the universe. But unlike in other galaxies, the Milky Way bar is hard to observe directly, owing to our position in the galactic disk. Data from the forthcoming 3rd data release of the Gaia mission will be able to test this model further, and future missions will discover if the dance goes on in other galaxies across the Universe. 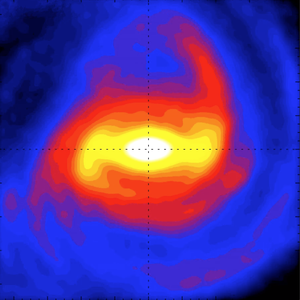 In this snapshots of a Milky Way galaxy simulation, the bar seen in the center and the spiral arms rotate with different rates. Every time they meet, the bar appears longer and its rotational speed lower. 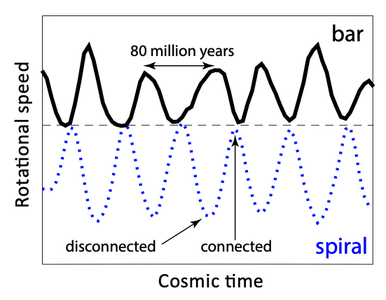 The rotational speed of the bar and spiral arm varies periodically with time. As the bar slows down, the spiral arm speeds up and vice versa. About every 80 million years the two structures merge and move together (dashed horizontal line).

Cosmic Dance: Snapshots of a Milky Way galaxy simulation. The bar seen in the center and the spiral arms rotate with different rates. If they are disconnected, the bar shows its true and smaller structure (left). Every time they meet, the bar appears longer and its rotational speed lower (right). 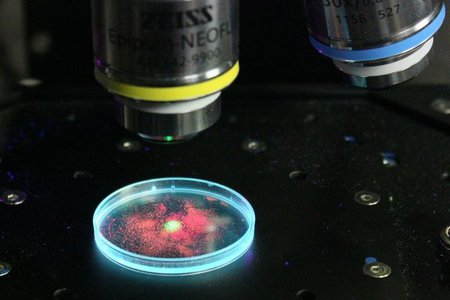