“Excellent and visible internationally”: The AIP receives all-around positive feedback in its evaluation, an independent assessment of all Leibniz institutions repeated regularly. Especially the institute’s high publication output and its convincing development in recent years and plans for the future are commended. The senate of the Leibniz Association has now confirmed the results of the evaluation, recommending continued funding by the federal government and the federal states and endorsing an application for additional institutional funding.

The evaluation committee specifically highlights the institute’s involvement in instrumentation: “One of the AIP’s greatest strengths is in designing, building and maintaining astrophysical instrumentation. The institute is involved in international networks that operate world-leading telescopes and satellite missions. Together with partners, it develops highly complex instruments for these and often plays a leading role in such projects.” The committee emphasizes involvement in developing ANDES and MOSAIC, two instruments for the Extremely Large Telescope (ELT) as being of great strategic significance for the AIP.

Also commended is the “outstanding, both in terms of numbers and quality” paper output in high-ranking journals by the institute’s scientists, which has further increased since the last evaluation.

The committee acknowledges the well-organized personnel changes, also at leadership level, during recent years and praises the number of high-profile grants by the European Research Commission (ERC) secured by AIP scientists, six in total. With its success in acquiring European funding, the institute is following recommendations made during the last evaluation seven years ago.

The AIP and its committees developed a future strategy for the institute, which was well received and deemed convincing during the evaluation. The central aim of the strategy is to establish a new research area, Precision Stellar Science, as an addition to the institute’s other two research areas. This includes adding a third director. The review board has voiced explicit support of these plans.

One recommendation made by the committee is an attention to career counselling inside the institute, which the AIP has already partly implemented in its profile, such as funds for travel to conferences, language courses and summer schools. Another recommendation is to further increase the share of women among the scientific staff above doctoral level, a goal that the AIP has also set itself with its ambitious cascading model and other measures.

Every seven years at the latest, Leibniz institutions are evaluated. The evaluation of the AIP was carried out in January 2022. The evaluation committee brings together well-known and highly reputable experts from different astrophysical and technology related departments. The evaluation criteria focus primarily on scientific performance, but there is also the prerequisite that a coherent research strategy is in place to secure funding as a non-university institute with a trans-regional, national and international role. 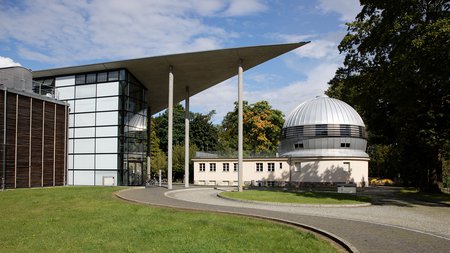 The AIP campus in Potsdam Babelsberg. 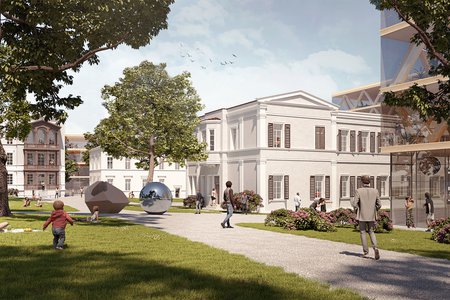