Exploring the history of the early Milky Way with sound

A team of astronomers has succeeded in dating some of the oldest stars in our galaxy with unprecedented precision by combining data from the stars’ oscillations in space – their “sound” – with information about their chemical composition. Some of these ancient stars were once part of a satellite galaxy, which fell into the gravitational field of the Milky Way in its early history. The results indicate that the Milky Way had already formed a substantial population of its stars before the merger 10 billion years ago.

The chemical composition, location, and motion of the stars observed today in the Milky Way encode precious information about their origin and history. By combining the precise data from the second data release of the ESA Gaia space mission with those from the high-resolution spectroscopic survey APOGEE, astronomers have recently identified the extra-galactic origin of an important population of today's Milky Way halo stars. Through rigorous analysis, it has been determined that they were part of a satellite galaxy called Gaia-Enceladus, which fell into the gravitational field of the Milky Way around 10 billion years ago. To properly understand how this merger affected our Galaxy requires a precise chronology of these events in the early history of the Milky Way, which a research team led by the University of Birmingham (UoB) and including the Leibniz Institute for Astrophysics Potsdam (AIP) now undertook.

To do this, the researchers used a relatively new method called asteroseismology, which is the study of global, resonant modes in stars. An analogy of this method are musical instruments: The size, shape and material of different instruments determine the combination and relative amplitudes and phases of the different harmonics of a frequency – or musical note – that reach our ear. This so-called timbre allows us to differentiate between a cello and a trombone, between a violin and a cello, and for some sensitive ears, between a Stradivarius and a modern violin. In the same way, the relative frequencies and amplitudes of the natural modes of oscillation of the stars depend on the characteristics of the “stellar resonance box”, i.e. the radius of the star and the density distribution inside it. Both of these properties change as the star evolves, and so, by using computer models of the stars, which act as our brains in identifying the musical instrument, we can accurately estimate their age.

With the frequencies of these stars, detected using data from the Kepler satellite in combination with Gaia and APOGEE data, the team determined with unprecedented precision the relative ages of about a hundred red giant stars. Some of these stars originate from Gaia-Enceladus and form a part of the remains of the dwarf galaxy that merged with the Milky Way in its early history.

The results, published in Nature Astronomy, have revealed that these accreted stars have similar, but slightly younger, ages compared to the majority of the stars born in situ, suggesting that when this collision took place, in the first billion years of the Galaxy formation, the Milky Way was already efficiently forming stars, which now reside mainly in its thick disc.

By using information from individual oscillation frequencies – as opposed to global, average, properties of the oscillation spectrum –, Asteroseismology allows scientists to infer very precise relative ages. The team now intends to apply this approach to larger samples of stars, and to include even the more subtle features of the frequency spectra. This will eventually lead to a much sharper view of the Milky Way’s assembly history and evolution, creating a timeline of how our galaxy developed.

“These results beautifully illustrate the impact that the combination of Kepler, APOGEE and Gaia have in the field of Galactic Archaeology. The sequence of events happening in the first steps of the formation of our Galaxy can finally be studied in great detail,” says Dr. Cristina Chiappini, scientist in the Milky Way and the Local Volume section at the AIP and one of the key collaborators in the project Asterochronometry, which led to the results. The collaborative project combines scientists of different areas of expertise. It is funded by the European Research Council and hosted by the Università di Bologna and the University of Birmingham. 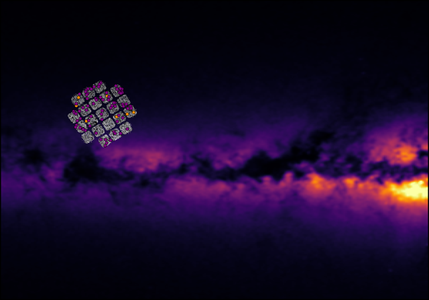 Milky Way stellar density map obtained with the StarHorse code using data from Gaia, superimposed with the field of view of the Kepler satellite on the left. The points are the APOGEE targets in the Kepler field. Of those, coloured in magenta are the older in situ stars, coloured in orange are the stars from Gaia Enceladus. 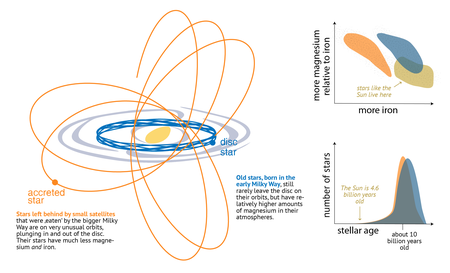 Infographics on stars in the Milky Way, see also the interactive version. 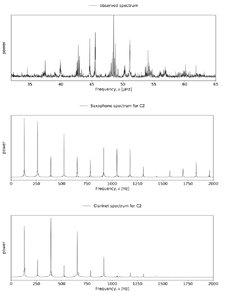 The sounds characteristic of the global oscillations of the accreted star KIC4143467 (top panel). The pitch (frequencies) of the sounds have been raised by a factor 6 million to bring them into the audible range, and so that the frequency difference between radial modes in the star is equal to the musical note C" (the fundamental frequency played by the saxophone and clarinet in the two bottom panels).

The "sound" of the oscillations of a star. 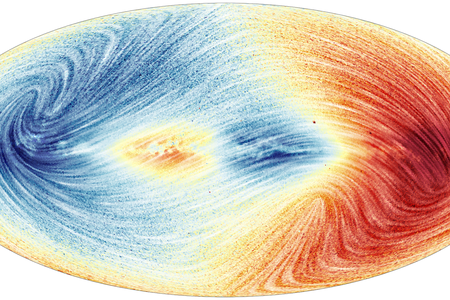