As part of the large-scale digitization project APPLAUSE, digitized photographic plates have recently become available online, with images of the sun taken between 1943 and 1991 at the Einstein Tower Solar Observatory in Potsdam.

At the time of its completion in 1924, the Einstein Tower on the Telegrafenberg in Potsdam was the most modern solar telescope in Europe. Between 1943 and 1991, it captured the image of the solar disk on more than 3,500 glass photographic plates, which the Leibniz Institute for Astrophysics Potsdam (AIP) is now making available to the public in digitized and processed form.

During their internship at the Leibniz Institute for Astrophysics Potsdam (AIP), school students from Potsdam and Berlin scanned these images. Afterwards, solar physicists at the AIP calibrated the images, measured the solar radius on the sky and provided the images with additional metadata such as information on the time of observation, the prevailing observation conditions, and the exposure time. They also corrected for atmospheric effects and enhanced contrast. These improved quality images are now freely available to the scientific community and the general public in a database.

In solar physics, these historical data are needed to fill gaps in time series spanning decades or even centuries and thus to better understand fluctuations in solar activity during the 11-year sunspot activity cycle and the 22-year magnetic cycle. The imaging of the entire solar disk at the Einstein Tower began in 1943 and complemented the drawings of the solar surface used until then. The aim was to obtain precise photometry of sunspots in order to track the activity cycle of the Sun.

From the mid-1950s, a spectrograph was also used to determine the strength of the magnetic field of sunspots in order to investigate details of their complexity. Magnetic fields are concentrated in sunspots and are subject to strong and often rapid changes. Images of the entire visible solar surface allow the magnetic fields studied in detail to be assigned to processes that occur outside the measurement area.

Most of the 3,500 images were taken between 1943 and the late 1960s with about 128 pictures per year. After 1970, only sporadic solar observations took place with an average of 22 images per year. The variation in the cadence of the observations across the almost 50-year period stem from a combination of various causes: At the end of the Second World War, bomb damage interrupted the observations, and the lack of photographic plates also made it difficult to take photographs in the following years. Also, as sun spots were the main focus of solar research at this time, photographs were not taken when active sunspots were not seen. Changes in the priority of scientific objectives also led to a decline of the number of taken images. Last but not least, the weather or poor observing conditions were also responsible for interruptions in the observation series.

The primary goal of the APPLAUSE project is to preserve the scientific heritage and make it usable for contemporary scientific exploitation. The now released digitized solar plates can be brought together with other recordings of solar observations, including sunspot drawings, to create a digitized archive of solar activity comprising the last 400 years. Modern computer technology and advanced image processing software have facilitated the creation of such archives over the last decade.

Movie of all images 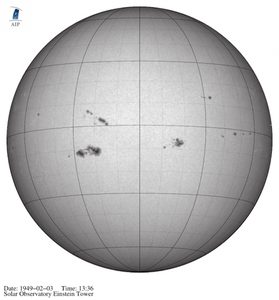 Negative of a photograph of the entire solar disk showing groups of sunspots. It was taken on 3rd February 1949 at the Einstein Tower Solar Observatory. 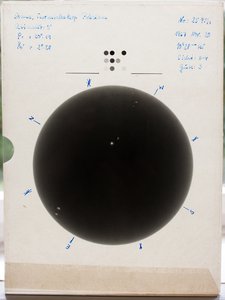 An original glass photographic plate from the Einstein Tower with an image of the Sun taken on 20th November 1967. 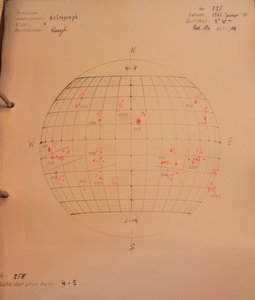 An example drawing from a sun observation book. The use of photographic plates supplemented such drawings from 1943 onwards. 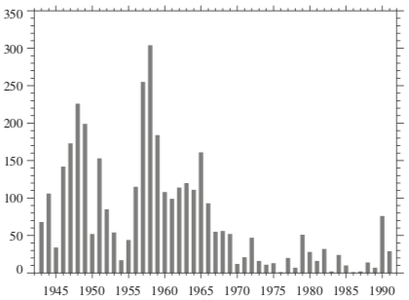 Data coverage of photographic plates in the years 1943–1991. Only sporadic observations were carried out after 1970.

The Einstein Tower shortly after the Second World War and today.