Between October 2019 and February 2020 the brightness of the star Betelgeuse has dropped by more than a factor of three. New observations by the NASA/ESA Hubble Space Telescope and the robotic STELLA telescope of the Leibniz Institute for Astrophysics Potsdam (AIP) now provide an explanation for the phenomenon.

Betelgeuse shines as a bright star in the constellation Orion. It belongs to the class of red supergiant stars and would reach beyond the orbit of Jupiter if placed in the center of our solar system. In autumn 2019, a sudden darkening of the star began, which was first visible from Earth through telescopes and later even to the naked eye - and was initially a mystery to science. At a distance of about 725 light years, the star is relatively close to our solar system. In fact, the dimming event would have happened around the year 1300, as its light is just reaching Earth now. Betelgeuse is destined to end its life in a supernova explosion. Some astronomers think the sudden dimming may be a pre-supernova event.

Thanks to new observational data obtained with the Hubble Space Telescope, an international team has now identified a dust cloud as the probable cause of the dimming: Scientists believe that the star unleashed superhot plasma from an upwelling of a large convection cell on the star's surface, similar to rising hot bubbles in boiling water, only many hundred times the size of our Sun. The material then passed through the hot atmosphere to the colder outer layers of the star. There it cooled down and the resulting huge dust cloud blocked the light from about a quarter of the star's surface, beginning in late 2019. By April 2020, the star had returned to its normal brightness.

The Hubble observations are part of a three-year Hubble study to monitor variations in the star’s outer atmosphere. The timeline that has been produced since then provided important new clues to the mechanism behind the dimming. Hubble observed the layers above the star's surface, which are so hot that they emit mostly in the ultraviolet region of the spectrum.

During the autumn months of 2019, Hubble detected dense heated material passing from the star’s surface into its outer atmosphere. "With Hubble, we see the material as it left the star’s visible surface and moved out through the atmosphere, before the dust formed that caused the star appear to dim," said lead researcher Andrea Dupree, associate director of The Center for Astrophysics | Harvard & Smithsonian. "We could see the effect of a dense, hot region in the southeast part of the star moving outward. This material was two to four times more luminous than the star’s normal brightness. And then, about a month later, the southern hemisphere of Betelgeuse dimmed conspicuously as the star grew fainter. We think it is possible that a dark cloud resulted from the outflow that Hubble detected."

Of particular importance during the time of the great dimming were velocity measurements of the outer layers of Betelgeuse obtained with the STELLA telescope of the AIP on Tenerife, whose observations complement those of Hubble. "STELLA was designed for observing individual objects over a very long period of time - especially magnetically active stars. It is perfectly suited for monitoring bright stars like Betelgeuse. STELLA had and is observing it basically every clear night since 2006," explains Klaus Strassmeier, co-author of the study and director at AIP.

Although the cause of the outburst is not known, the research team thinks it was aided by the star’s pulsation cycle. This continued normally throughout the event. The AIP scientists used STELLA to measure changes in the velocity of the plasma on the star's surface as it rose and fell during the pulsation cycle. The star was expanding in its cycle at the same time as the convective cell was upwelling. The pulsation rippling outward from Betelgeuse may have helped propel the outflowing plasma through the atmosphere.

"Had a large and very cool starspot caused the dimming, the velocities of the plasma would not have followed the pulsation but the rotation of the star. The latter is very slow and takes many years. It would therefore not have been able to show what STELLA observed, and certainly not a reversal of the plasma velocity when the star was faintest," Strassmeier concludes. 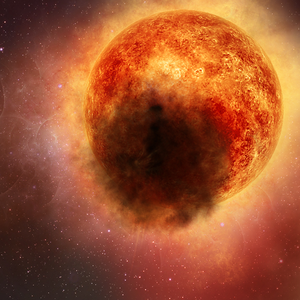 Artist’s impression of the darkening of the red supergiant Betelgeuse.