Neptune closer than ever: Super Sharp Pictures from the Edge of our Solar System

Astronomers from the Leibniz-Institute for Astrophysics Potsdam (AIP) tested as part of an international team a new observation mode with the MUSE instrument at the Very Large Telescope (VLT) in Chile in June 2018. The technology used for the first time suppresses the blurred effects of the atmosphere even better and produces very sharp images of planets, stars and galaxies – among others of Neptune, which was once discovered at the predecessor institute of the AIP.

The earth's atmosphere as a disruptive factor

When observing the Universe from Earth, the atmosphere impairs the astronomical images. Therefore, astronomers have been trying to suppress this turbulence for a long time. One possibility is to observe from outside the Earth's atmosphere: The Hubble Space Telescope, for example, is so powerful because it does not have to consider the atmospheric effects.

With the help of adaptive optics (AO), astronomers can also eliminate these atmospheric effects in ground-based telescopes such as the VLT: In the ESO VLT facility on Mount Paranal, artificial stars at 80 km height, made using four lasers, are used to determine the difference between the model and the observed blurred images and correct the atmospheric turbulence. This powerful adaptive optics, for the first time, has now been tested with the MUSE 3D spectrograph in its so-called narrow-field mode with laser tomography. This corrects almost all atmospheric turbulence. Although the wide-field mode used so far enables observations in a larger field of view, it does not correct the blurring as well and produces a lower resolution images than the new narrow-field mode.

MUSE was partly developed and built in Potsdam and has been installed at the VLT in 2013. "By removing the effects of the atmosphere and thereby increasing the sharpness of the images, we can increase the physical information from these objects," says Dr. Andreas Kelz from the AIP.

The heirs of the Neptune discovery

One of the first objects observed by the MUSE team at the AO premiere in narrow-field mode was the planet Neptune, a special celestial body, from Potsdam's point of view: In 1846 at the Berlin observatory, the forerunner of the AIP, Johann Gottfried Galle discovered the planet on the edge of our solar system. Neptune’s orbit was predicted by the French mathematician Urbain Le Verrier, and the German astronomers followed his predictions.

The MUSE team, consisting mainly of French and German scientists, has now achieved spectacular images thanks to the new observation mode: the details in Neptune's clouds even exceed the sharpness of the pictures made with Hubble Space Telescope. The spectral data also provides chemical and dynamic information - in every pixel of the image.

Not only the solar system, but also our home galaxy can be better examined thanks to the new image quality. MUSE's spectral information enables us to explore, among other things, the evolution, chemical composition, age, and dynamics of globular clusters, which are among the oldest star agglomerations in our galaxy and can harbour massive black holes in their centres. AIP scientist Dr. Tanya Urrutia, who is involved in the evolution of galaxies and was on site at the VLT together with colleague Dr. Peter Weilbacher, is thrilled: "The enormous increase of details in the images of centres of scratch distant galaxies, coupled with the dynamics and element frequencies that the MUSE instrument offers us, opens a new window in the exploration the question of how supermassive black holes will be fed and activated by the gas in the central region. It's like having the mighty MUSE instrument in space!"

MUSE is a joint project of seven European Research Institutes,

The German MUSE partners from the astrophysical institutes in Potsdam (AIP) and Göttingen (IAG) are supported by the Federal Ministry of Education and Research (BMBF). 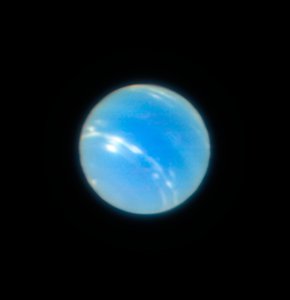 Observations of Neptune. Left: the blurry image of the planet without the adaptive module being on. Middle: the sharp images of adaptive optics, including details in the methane clouds. Right: Shot from the Hubble Space Telescope with less detail. Credit: AIP/P. Weilbacher

These images of the globular cluster NGC 6388 were taken during the tests of the narrow-field mode of the adaptive optics of the MUSE / GALACSI instrument at the VLT of the ESO. The image on the left comes from MUSE in wide-field mode (without AO), the middle image is an enlargement of a small part of this view. The image on the right shows the same view in MUSE's Narrow Field mode (with AO).