Oct. 23, 2020 // An international research team has used observational data and simulations to determine the redshift in the Sun's gravitational field with unprecedented accuracy. This effect, predicted by Einstein, was the reason for constructing a solar telescope at the beginning of the 1920s, capable of measuring the spectrum of the Sun: the Einstein Tower in Potsdam.

Between 1911 and 1916, Albert Einstein published his General Theory of Relativity, predicting that light travels on curved paths near massive objects. He also expected that spectral lines in the Sun's gravitational field would shift to longer wavelengths (gravitational redshift). In 1911, Einstein predicted a theoretical redshift of approximately two millionths of a wavelength for the Sun.

To determine the redshift, a research team led by the Instituto de Astrofísica de Canarias (IAC) has used observations of the solar spectrum reflected by the moon. The applied instrument HARPS (High Accuracy Radial velocity Planet Searcher) is equipped with a technology for highly accurate wavelength measurement, but is not suitable for direct solar observation. Using the spectrograph the scientists obtained data in which they could measure the wavelength shift of many iron lines with high accuracy. Chemical elements leave traces in the form of lines in the spectrum of stars, and iron lines are particularly suitable for the present study for two reasons: there are many more spectral lines from iron than from any other element, which is why a sufficiently large number of undisturbed lines are available for the measurement. Also, reliable laboratory measurements of their rest wavelengths are available, which is essential to determine the gravitational shift - the difference between the wavelength measured in the laboratory and that measured in the solar spectrum.

In addition to observational data, the study also used precise modelling of the solar spectrum to theoretically predict the wavelength shift of different iron lines. Dr. Matthias Steffen from the Leibniz Institute for Astrophysics Potsdam (AIP) was involved in the publication and, together with colleagues from Heidelberg and Paris, analysed three-dimensional computer simulations that predict the flow velocities and related temperature perturbations in the solar atmosphere, with the latest simulations also taking into account the influence of magnetic fields.

The synthetic spectra subsequently computed from these 3D models showed that weak iron lines are blue-shifted by up to 600 m/s due to convective motions and correlated temperature fluctuations in the solar atmosphere. This almost completely compensates for the redshift of 633 m/s caused by gravity - which is of the same order of magnitude but in the opposite direction. This is one of the reasons why early attempts to prove Einstein's theory with line-shift measurements on the Einstein Tower in Potsdam failed.

The new and extremely accurate wavelength measurements of the solar spectrum could also be used in the future to study the Sun's photosphere. If the theoretical gravitational redshift is assumed to be correct, the new data will enable even more precise studies of the structure and dynamics of the photosphere and to develop refined 3D models of the convective flows at the surface of the Sun.

González Hernández, J. I. et al. (2020): The solar gravitational redshift from HARPS-LFC Moon spectra. A test of the General Theory of Relativity. Astronomy & Astrophysics (in press) 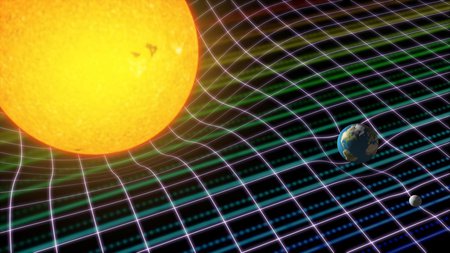 Artistic representation of the Sun, the Earth and the Moon with the space-time curvature of Einstein's General Relativity over the spectrum of sunlight reflected from the Moon (in colours from blue to red).

One of the models used to compute synthetic solar spectra. The simulations were created at the AIP using the radiative hydrodynamics code CO5BOLD. Dark lanes are the intergranular regions of cooler temperature that harbor magnetic field structures.