On the trail of 1.8 billion stars

Spanning a period of 34 months, the ESA Gaia mission has now published the first part of its third data release (EDR3). It provides the most precise measurements of positions and motions of 1.8 billion objects across the sky. The Leibniz Institute for Astrophysics Potsdam (AIP) is strongly involved in the Gaia data reduction and is one of the official Gaia Partner Data Centres that host a mirror of the complete Gaia archive.

The Gaia space telescope measures fundamental characteristics of stars and other celestial objects at a level of precision never achieved before. This extensive sky survey provides the basic observational data to tackle an enormous range of key questions in various fields of astrophysics. The main focus lies on the study of structure and evolutionary history of our galaxy.

"Gaia catalogues will be the reference database for future generations of astrophysicists. Already now, about five scientific publications are published based on Gaia data every day. Measured by the number of publications, this is the most successful astrophysical mission ever", explains Dr Katja Weingrill, PI of the Gaia project at the AIP.

The 1.8 billion objects in the new Gaia catalogue mainly comprise stars in the Milky Way, but also distant galaxies and quasars, and closer objects in our solar system. The measurements from 12 additional months of observation not only increased the number of objects in the catalogue, but also made the incredible precision of the measurements possible. The accuracy of the parallaxes - and thus their distance determination - has been increased by 30 percent and the accuracy of the stars' movements across the sky has doubled compared to the last catalogue. This was possible because of the larger number of observations processed for Gaia EDR3 and the larger time difference between the first and last observation.

In order to process the overwhelming amount of data that Gaia produces, a consortium of more than 500 scientists and software developers, the Data Processing and Analysis Consortium (DPAC) was formed. Scientists at the AIP contribute to the DPAC with three parts: the background correction for Gaias spectral instrument, a software pipeline reducing additional data from dense areas on the sky, and the scientific exploitation of the Gaia data by providing the public Gaia archive.

Alongside with the catalogue, the scientists from DPAC released a set of four science verification papers that demonstrate the quality of the new Gaia catalogue. One of them was written with a contribution from the AIP Gaia Team and analyses the Magellanic Clouds, the two galaxies that orbit the Milky Way. Gaia EDR3 data enables it to clearly separate the stellar population of the large Magellanic Cloud into different age classes for the first time - from 50 million year young stars to several billion years old ones. It could be shown that the younger stars move faster around the centre of the Large Magellanic Cloud than the older ones. A movement of mostly young stars in the bridge between the two clouds towards the Large Magellanic Cloud could be verified for the first time.

As for previous releases, the Gaia data is made available through the Gaia Partner Data Centres, one of which is the AIP. The AIP Gaia Archive provides most convenient ways for scientists and other interested parties to work with the precious data. Dr Harry Enke, responsible for the AIP data archive, explains: “The user-friendly interface on the webpage gaia.aip.de allows researchers from all over the world to access, filter and process the data they need in a very flexible way. It offers services like SQL query submission, cone search facilities, a private database space for users, and Virtual Observatory based access via scripting as well as additional catalogues and cross-match tables.” 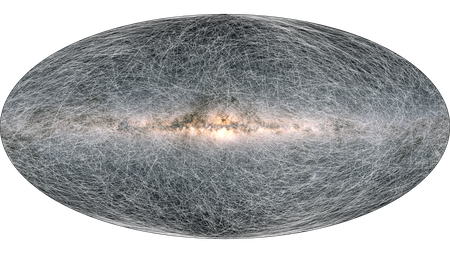 The motions of 40 000 stars across the sky over the next 400 thousand years, calculated from Gaia observations. Each trail representing the displacement of one star.