Gas tails give them their jellyfish-like appearance: So-called jellyfish galaxies are difficult to study because of their low brightness. An international research team has now gained new insights into the physical conditions prevailing in the gas tail of these galaxies.

Jellyfish galaxies are galaxies that crash into the centre of a galaxy cluster, forming a gas tail. This is created as the galaxy moves towards the centre of the cluster, pushing the interstellar gas in the opposite direction. In this way the galaxies acquire their characteristic appearance, which is reminiscent of a jellyfish. In earlier studies, it has already been proved that this gas tail can lead to star formation - but it was not clear until now which factors could cause this. It is known, for example, that magnetic fields in galaxies can contribute to star formation. But do they also play a role in the gas tails of jellyfish galaxies?

In a recent publication in the scientific journal Nature Astronomy, a German-Italian team is now getting to the bottom of this question. Ancla Müller and Prof. Dr. Ralf-Jürgen Dettmar from the Ruhr University Bochum describe the results together with Prof. Dr. Christoph Pfrommer and Dr. Martin Sparre from the Leibniz Institute for Astrophysics Potsdam (AIP), together with colleagues from the INAF - Italian National Institute of Astrophysics in Padua, Cagliari and Bologna. They analysed the magnetic field structure of the Jellyfish galaxy JO206 and could show that not only did the galactic disk have a strong magnetic field, but so did the gas tail. From the unusually high proportion of polarised radiation, they were able to conclude that the field is aligned very precisely along the tail. "As the galaxy falls on the centre of the galaxy cluster, an interaction takes place with the medium between the individual galaxies and its magnetic field," explains Ancla Müller. This process could amplify the magnetic field of JO206 and also generate the high proportion of polarised radiation.

In order to explain these unusual parameters, computer simulations were then used, by means of which the scientists developed a theory: According to this theory, JO206 rushes at high speed to the centre of the galaxy cluster, causing the magnetic fields to interact, and hot winds from the medium between the galaxies to collects as accumulations of plasma. Parts of this mixture of ions, electrons and neutral particles condense on the outer layers of the gas tail, where they mix with the surrounding matter. "As the jellyfish galaxy flies through the galaxy cluster, its magnetic field wraps around the galaxy like a mantle and is further strengthened and smoothed by the high speed of the galaxy and by cooling effects", explains Prof. Pfrommer. The magnetic layer protects the gas tail from falling apart. According to these results, there would be enough material for star formation in the gas tail of JO206. Further measurements on other objects must now show whether this theory can be confirmed.

Press release of the Ruhr-Universität Bochum 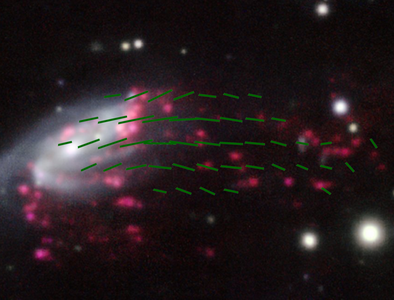 The galaxy JO206 and its ordered magnetic field (green lines) along the gas tail. The pink objects characterize the H-alpha emission, which possibly gives an indication of the formation of new stars.