The Leibniz Institute for Astrophysics Potsdam (AIP) provides protective equipment to fight the corona epidemic. The Minister of Science and Culture Manja Schüle hands over the utensils, which were collected at Brandenburg universities and non-university research institutions, to the mayor of Potsdam, Mike Schubert.

Several boxes of protective suits, overalls, breathing masks, gloves, and disinfectants will be collected centrally at the fire station and distributed by the city as needed. In addition to the AIP, the donors include the Fraunhofer Institute for Cell Therapy and Immunology in Potsdam-Golm, the Leibniz Institute for Agricultural Engineering and Bioeconomy in Potsdam, the Leibniz Institute of Vegetable and Ornamental Crops in Großbeeren and DESY in the Helmholtz Association in Zeuthen as well as the Film University Babelsberg KONRAD WOLF. Further material comes from the Max Planck Institute of Molecular Plant Physiology in Potsdam-Golm.

The AIP provides gloves, face masks, and overshoes, which are normally used by the institute’s Technical Section. This protective clothing and equipment comes from the laboratories and workshops, where instruments for telescopes and satellites are developed and built. For example, it is not possible to enter a cleanroom without protective clothing. Likewise, the equipment in the laboratories provides protection against hazardous substances and prevents the contamination of sensitive components such as cameras or lenses. 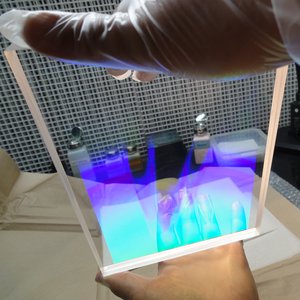 In the laboratories of the AIP, gloves are used to inspect sensitive components, such as this holographic grating.