Topping out ceremony for the new AIP building in Babelsberg

After the laying of the foundation stone in October, the main body of the planned extension building for the Leibniz Institute for Astrophysics Potsdam (AIP) is already complete. To mark the occasion, today the institute celebrated with a topping out ceremony. Around 200 guests were in attendance, with Dr Manja Schüle, Minister for Science, Research and Culture of the State of Brandenburg, and the Lord Mayor of Potsdam, Mike Schubert, addressing the crowd.

After a welcome from the institute’s scientific chairman and spokesperson for the Executive Board, Professor Matthias Steinmetz, and the greeting of the guests of honour, the foreman of the construction company lifted the topping-out wreath at the site of the future main entrance and dedicated a ceremonial speech to the building.

Wolfram Rosenbach, administrative chairman at AIP, praised the rapid progress of construction: “We are very pleased that this first important stage of the new building has been completed, faster than planned and within budget.”

The Minister for Science, Research and Culture of the State of Brandenburg, Dr. Manja Schüle said: “A topping out ceremony for the future at a location with tradition: The new building of the Leibniz Institute for Astrophysics Potsdam brings together cutting-edge research and ‘real life’ in one building. As the number of AIP employees has nearly doubled in recent years, more space is urgently needed – for stargazing and for encounters on Earth. In addition to office and conference rooms, the new building will also house an institute canteen and exhibition areas where historical equipment and instruments will be on display. The AIP will also do justice to its growing importance as a leading centre of astrophysical research and will gain further international appeal as a host of scientific events. We are happy to invest 11.5 million euros for this purpose. This is how the future ‘Made in Brandenburg’ works. I wish only the best for the further construction stages!”

The shell construction, which looks onto the current ensemble of listed historical and modern AIP buildings in Babelsberg, already gives an impression of the planned interior. This includes the future exhibition space for interesting objects in the entrance area and the planned conference hall for up to 199 guests. In total, the building will have a useable area of 2,620m² and will primarily provide meeting rooms and offices for the institute's growing number of employees. An enhanced cafeteria service is also planned.

Mayor Mike Schubert explains: “With today's topping out ceremony, an important new building project for Potsdam as a science location has taken a big step forward. In view of the previous building construction phase, this was also a really fast step. With the new building, AIP will gain additional space for its outstanding research. I wish AIP every success for the completion phase of the new building and I hope that the remarkable pace of construction can be maintained.”

Construction began in February 2021 with the first site preparations. Construction of the shell began in August, and in October of the same year the ceremonial laying of the foundation stone took place with some 200 guests. The building is scheduled for completion in mid-2024. The Berlin company of Thomas Müller Ivan Reimann Gesellschaft von Architekten mbH are tasked with realizing the new building project.

Information about the new building 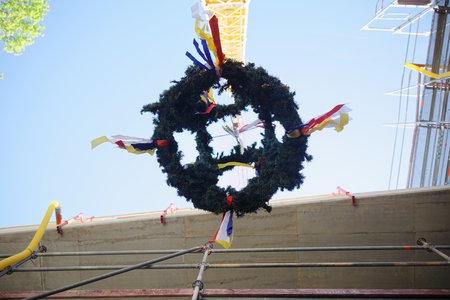 The ceremonial topping out wreath, which was lifted with a speech from the foreman of the construction company. 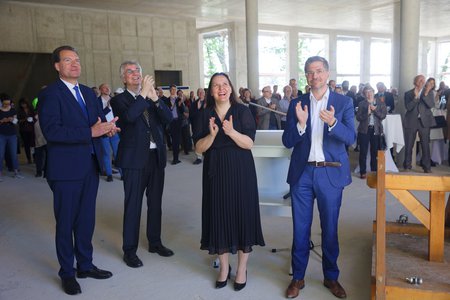 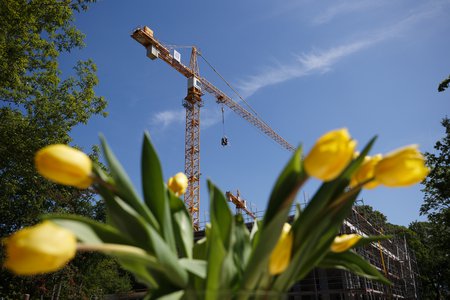 The lifted ceremonial topping out wreath. 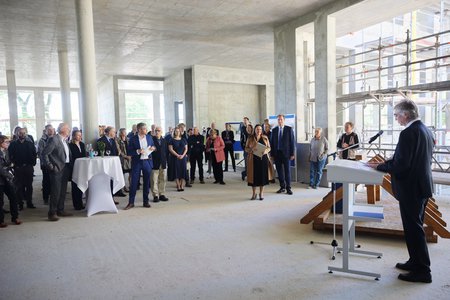 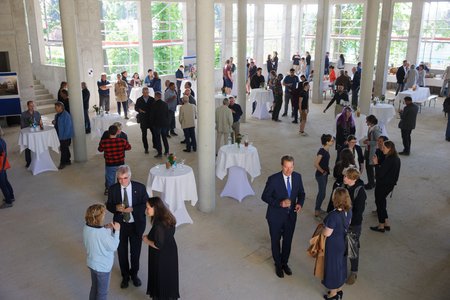 Numerous guests, including current and former employees of the AIP as well as construction workers and Babelsberg neighbours celebrated the topping-out ceremony inside the shell construction. 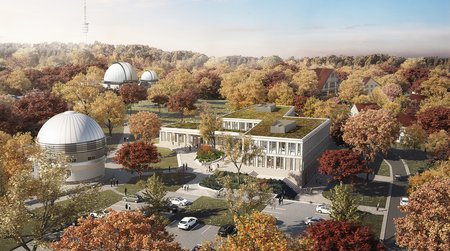 Aerial view on the new building. 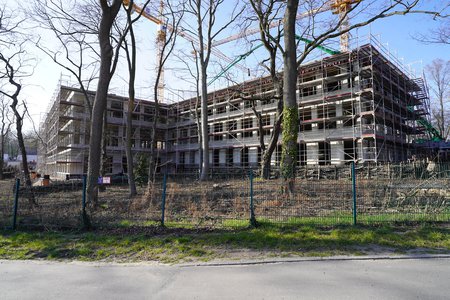 The construction site in spring 2022.