Glimpse through the keyhole – first data release from eROSITA

The eROSITA collaboration releases the first set of data from the X-ray telescope eROSITA as an "Early Data Release" for research worldwide. At the same time, 35 scientific publications are published with results from the first mission phase. Researchers from the Leibniz Institute for Astrophysics Potsdam were significantly involved in one third of the publications, providing parts of the software for data analysis, analyzing observations of neutron stars and white dwarfs as well as investigating the effects of X-rays on the atmospheres of young exoplanets.

On July 14, 2019, the German X-ray telescope on board the Russian Spektrum-Roentgen-Gamma (SRG) satellite set off on the 1.5-million-kilometer journey to its final observation position. Just under six months later, it began regular operations and has since been scanning the entire sky in search of new X-ray sources. This enables an inventory of the X-ray sky with unprecedented accuracy and sensitivity.

Already during the travel to its final observing position, eROSITA made about 100 observations of different objects and sky fields, which will now be made freely available to the worldwide astronomical community. At a press conference on June 28 at the annual meeting of the European Astronomical Society (EAS), scientists will report on the first results of these observations from the early phase of the mission, which they are going to publish in a special issue of the journal Astronomy & Astrophysics.

Researchers at the AIP are leading four publications of their own and are significantly involved in a third of these papers. One focus of the work now presented was the survey of a relatively small sky field, about one 300th of the area of the entire sky. The section was observed with the same sensitivity that the survey will only achieve for the entire sky in several years. Over 30,000 objects, most of them previously unknown, were detected. The new discoveries range from nearby individual stars to cannibal stars that drain matter from their neighbors, and massive black holes at the centers of galaxies to clusters of galaxies, the largest gravitationally bound structures in the universe. "Analyzing this test field is like taking a glimpse through a keyhole for us. Soon, however, the door will open and we will discover all the splendor," says Georg Lamer, a project scientist at AIP who contributed the software that discovered the X-ray sources.

The specialty of Axel Schwope, project manager at AIP, is extremely compact objects, neutron stars and white dwarfs, which eROSITA observed in detail during the first phase of the mission. One of the observations, which lasted more than a day, provided the image of a of a single neutron star, which reaches a surface temperature of up to 1.5 million degrees and therefore shines brightly in X-ray light. "The analysis of this extremely long observation has revealed completely new features in the star's spectrum that are theoretically still completely unexplained," Axel Schwope says enthusiastically. "New phenomena, new objects and new physics will be revealed and made possible by eROSITA in concert with other telescopes."

Completely different astronomical objects can also be explored with eROSITA. For example, Grace Foster, who is working on her doctoral thesis in the AIP section “Stellar Physics and Exoplanets” led by Prof. Katja Poppenhäger, has been studying the X-ray irradiation of planets in other solar systems, known as exoplanets. "When exoplanets are strongly irradiated by their central star at X-ray wavelengths, they can lose parts of their atmosphere. For smaller exoplanets, even the entire atmosphere can boil away," Grace Foster explains.

eROSITA (short for Extended Roentgen Survey with an Imaging Telescope Array) is an X-ray telescope built by a German consortium led by MPE. The AIP contributes software for data analysis, with emphasis on satellite positioning and detection of X-ray sources on the sky. AIP also provided flight hardware for the camera's filter wheels and all of the ground mechanical segment equipment for integration and testing of the X-ray telescope array.

Earlier news from the AIP on eROSITA: 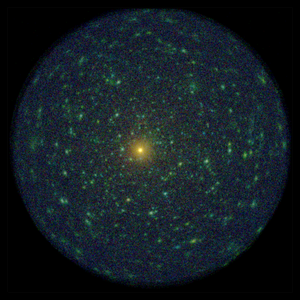 The Pulsar PSR B0656+14, a rotating neutron star, is the bright object in the center of this image, which was exposed for more than a day. The star is about 900 light-years from Earth. It rotates about three times per second on its own axis, exhibiting properties that could be described or measured in part for the first time with eROSITA. 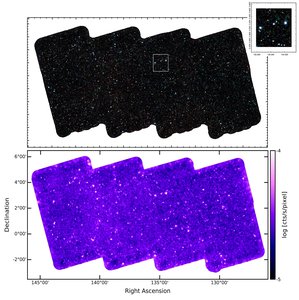 The field called “eFEDS” (the eROSITA Final Equatorial Depth Survey) was selected as the test field for the final sky survey with eROSITA. The upper image shows all sources found, color coded according to their energy. The small inset shows a zoom on a supercluster, a collection of individual galaxy clusters that are in the process of merging.

In the lower image, all point sources (stars, black holes) have been removed. What remains is the diffuse radiation of galaxy clusters in the background and the halo of the Milky Way in the foreground. The image thus gives an impression of the large-scale structure of the universe in X-rays.

Time-lapse observation of the neutron star PSR B0656+14 with eROSITA. The total observation of about 28 hours is summarized in 25 seconds. In the first part, the uninterrupted incoming stream of photons can be seen quasi in real time (snapshots). In the second part of the video, the gradually evolving deep image of the X-ray sky is shown (long-term exposure image). The target of the observation was the bright object in the center of the image, from which about 800,000 photons were collected. In the surrounding area X-ray sources flash again and again for a few hours (arrow marks). These are probably radiative outbursts on Sun-like stars.
Credit: eROSITA collaboration, AIP/A. Schwope,I. Traulsen, G. Lamer
Downloads:
Image [150 KB]
Video [12.9 MB]