The X-ray sky in its full glory

The eROSITA space telescope has provided a new, sharp 360° view of the hot and energetic processes across the Universe. The new map contains more than one million objects, roughly doubling the number of known X-ray sources discovered over the 60-year history of X-ray astronomy. Scientists at the Leibniz Institute of Astrophysics Potsdam (AIP) have contributed with the discovery of a circular structure caused by a black hole outburst 10,000 years ago.

Over the course of 182 days, the eROSITA X-ray telescope has completed its first survey of the full sky. Most of the new sources are active galactic nuclei at cosmological distances, marking the growth of gigantic black holes over cosmic time. Clusters of galaxies in the new map will be used to track the growth of cosmic structures and constrain cosmological parameters.

“The completion of the first all sky survey fills us with great satisfaction and some pride. Since 2006, we have been planning the mission and the scientific yield. The fact that we were able to create a complete, detailed image of the X-ray sky less than 11 months after the launch of eROSITA makes us euphoric about the full scientific harvest,” says Dr. Axel Schwope, project manager at the AIP. “The celestial observations with eROSITA will continue until 2023 and promise many interesting discoveries in the relatively unexplored X-ray light of space.”

The AIP team has already made a surprising discovery. The astronomers found a very special object during their observations with the X-ray telescope: a closed, luminous ring. It was discovered when eROSITA scanned over a region in the southern Milky Way in February 2020. The ring is caused by X-rays scattered in a dust cloud in the plane of the Milky Way. The origin of the radiation is a faint blue source in the centre of the ring, assumed to be a black hole accompanied by a companion star. One year before, a massive outburst of this object was recorded by other X-ray telescopes. For several weeks, it was 10,000 times brighter than at present.

At the time when eROSITA registered this image, the central source appeared inconspicuous again. However, a tiny fraction of the burst radiation was scattered by a dust cloud on its thousands-year-long travel through interstellar space. Due to this detour the scattered X-rays arrived one year after the direct radiation from the burst, similar to an echo. This extra travel causes the apparent ring which will grow with time before becoming too faint to be observable. While a few dust scattering rings were observed in the past around other transient X-ray sources, with an angular diameter of more than twice the size of the full moon the new structure is by far the largest of its kind. Dr. Georg Lamer of the AIP, who discovered the object in the eROSITA data, emphasises its importance: “Apart from the stunning beauty of the image, the discovery is also scientifically valuable, since it may help to measure a precise distance to the black hole.”

eROSITA is an X-ray telescope built by a German consortium under the leadership of the MPE Garching and one of the two telescopes on the Russian-German Spectrum-X-Gamma (SRG) satellite. The satellite was successfully launched on July 13, 2019, with a Proton-M rocket from Baikonur. eROSITA will perform several all-sky X-ray surveys. The AIP contributed to the data reduction software system with special emphasis on the attitude solution system and the source detection software. The institute also provided flight hardware for the camera filter wheels and the whole mechanical ground segment for integration and tests of the X-ray telescope array. 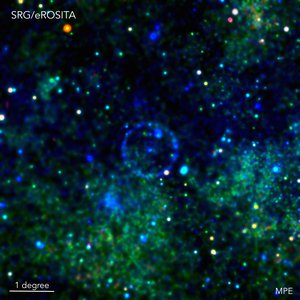 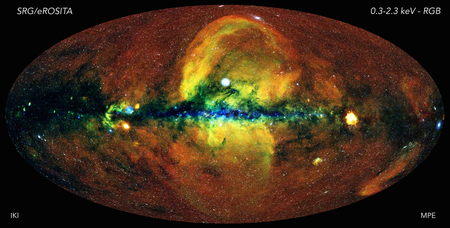 The energetic universe as seen with the eROSITA X-ray telescope.