Superflares, extreme radiation bursts from stars, have been suspected of causing lasting damage to the atmospheres and thus habitability of exoplanets. A newly published study found evidence that they only pose a limited danger to planetary systems, since the radiation bursts do not explode in the direction of the exoplanets.

Using optical observations from the Transiting Exoplanet Survey Satellite (TESS), astronomers at the Leibniz Institute for Astrophysics Potsdam (AIP), in collaboration with scientists in the US and Spain, studied large superflares on young, small stars. These class of stars, also called “red dwarfs,” have a lower temperature and mass than our own Sun.

Many exoplanets have been found around these types of stars. The question is whether these exoplanets are habitable, since red dwarfs are more active than our Sun, and flare much more frequently and intensely. Flares are magnetic explosions in the atmospheres of stars that expel intense electromagnetic radiation into space. Large flares are associated with the emission of energetic particles that can hit exoplanets orbiting the flaring star, and alter or even evaporate the planetary atmospheres.

Ekaterina Ilin, PhD student at AIP, and the team developed a method to locate where on the stars’ surface flares are launched from. “We discovered that extremely large flares are launched from near the poles of red dwarf stars, rather than from their equator, as is typically the case on the Sun,” said Ilin. “Exoplanets that orbit in the same plane as the equator of the star, like the planets in our own solar system, could therefore be largely protected from such superflares, as these are directed upwards or downwards out of the exoplanet system. This could improve the prospects for the habitability of exoplanets around small host stars, which would otherwise be much more endangered by the energetic radiation and particles associated with flares compared to planets in the solar system.”

The detection of these flares is further evidence that strong and dynamic concentrations of stellar magnetic fields, which can manifest themselves as dark spots and flares, form close to the rotational poles of fast-rotating stars. The existence of such “polar spots” has long been suspected from indirect reconstruction techniques like (Zeeman) Doppler Imaging of stellar surfaces, but has not been detected directly so far. The team achieved this by analysing white-light flares on fast-rotating M dwarf stars that last long enough to have their brightness modulated by being rotated in and out of view on the stellar surface. The authors were able to directly infer the latitude of the flaring region from the shape of the light curve, and also showed that the detection method was not biased towards particular latitudes. “I'm particularly excited that we were finally able to substantiate the existence of polar spots for these fast rotating stars. In the future, this will help us to understand their magnetic field structure better,” adds Katja Poppenhäger, head of the section Stellar Physics and Exoplanets at AIP.

The scientists searched the entire archive of observations obtained by TESS for stars that exhibit large flares by processing the light curves of over 3000 red dwarf stars, totalling over 400 years of cumulative observing time. Among these stars, they found four which were suited for the new method. Their results show that all four flares occurred above ∼55 deg latitude, that is, much closer to the pole than solar flares and spots, which usually occur below 30 deg. This result, even with only four flares, is significant: if flares were spread equally across the stellar surface, the chances of finding four flares in a row at such high latitudes would be about 1:1000. This has implications for models of the magnetic fields of stars and for the habitability of exoplanets that orbit them. 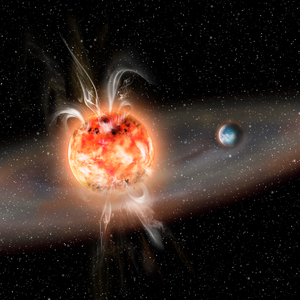 Small stars flare actively and expel particles that can alter and evaporate the atmospheres of planets that orbit them. New findings suggest that large superflares prefer to occur at high latitudes, sparing planets that orbit around the stellar equator.