With 35,000 eyes in the sky: world's largest fibre spectrograph completed

Dec. 2, 2020 // Astronomers from the Leibniz Institute for Astrophysics Potsdam (AIP), together with colleagues from Germany and the US, have completed an astronomical spectrograph that is capable of creating the largest map of the cosmos.

The discovery of the accelerated expansion of the universe through the observation of distant supernovae has led to the postulation of the so-called Dark Energy. Up to now, the nature of this “anti-gravity”, that drives the universe apart, is unknown. This has initiated various scientific projects, such as the Hobby-Eberly Telescope Dark Energy Experiment (HETDEX). HETDEX aims to create a three-dimensional map of 2.5 million distant galaxies that will help astronomers understand how and why the expansion of the universe is speeding up over time.

“To be able to determine the distances of remote galaxies, astronomers must not only find these faint objects, but also analyze their light spectroscopically, i.e. disperse it into the different wavelengths”, explains Dr Andreas Kelz, the local HETDEX project leader at AIP. For this purpose, a powerful multi-channel spectrograph called VIRUS has been built. It is connected to the telescope by a system featuring 35,000 optical fibres, that have been developed, assembled and tested at AIP. With the completion of the full instrument and its installation at the 10-metre telescope at McDonald Observatory in Texas, a milestone has been reached. VIRUS, the Visible Integral-field Replicable Unit Spectrograph, is actually a massive machine made up of dozens of copies of optical fibre bundles and spectrographs working together for efficiency.

“While it took a decade to build and install the full instrument, the modular approach of the system allowed a step-by-step implementation, so that the scientific survey could already commence three years ago with the first modules of the instrument in place.”, explains Kelz. This approach not only contributes to cost reduction, but also allowed for technology transfer and commercial manufacturing with industrial partners.

The astronomical survey works by aiming the telescope at two regions of the sky near the Big Dipper and Orion. For each pointing, the telescope currently records around 32,000 spectra, simultaneously, capturing the cosmic fingerprint of the light from every object within the telescope’s field of view.

To produce the map needed for the project, astronomers will combine one billion spectra and in particular search for distant galaxies. These galaxies range in distances from 10 billion to 11.7 billion light-years away, so they represent an epoch when the universe was only a few billion years old. Their spectra carry information about how fast the galaxies are moving away from us as a result of the expansion of the universe.

HETDEX already released 15,000 observations with over one million detections of astronomical objects. AIP scientist Prof Dr Lutz Wisotzki who is a member of the HETDEX steering committees explains: “These data are opening a gold mine for the diverse research interests at our institute, from the oldest stars in the Milky Way halo via active black holes in the centre of galaxies to the gaseous envelopes of infant galaxies in the young universe.”

The AIP, the innovation centre for fibre spectroscopy and sensing innoFSPEC and the BMBF supported the Potsdam contributions for HETDEX. 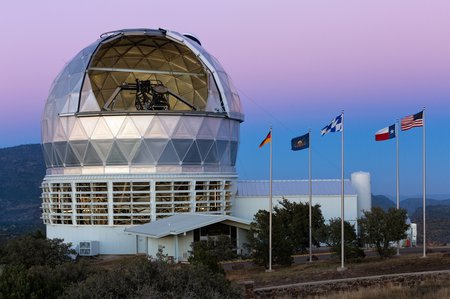 Dome of the 10-metre Hobby-Eberly Telescope at McDonald Observatory in Texas. 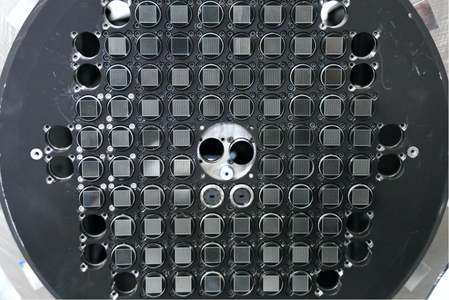 The focal plane of the Hobby-Eberly Telescope. Starlight hits an array of 78 fibre plugs (each containing 448 glass fibres) instead of a camera. These guide the light to over 150 connected spectrographs, where it is analysed.