First images of the Sun from Solar Orbiter

Solar Orbiter, a mission of the space agencies ESA and NASA, publishes for the first time images that show our home star as close as never before. Prior to this, the test phase of all instruments was successfully completed.

Five months ago Solar Orbiter started its journey to the Sun. Between mid-March and mid-June, the ten instruments on board were switched on and tested, and the spacecraft made its first approach to the Sun. Shortly afterwards, the international science teams were able to test all instruments together for the first time.

In addition to visible light, the Sun also emits X-rays, especially during solar flares. The Leibniz Institute for Astrophysics Potsdam (AIP) is mainly involved in the mission with the X-ray telescope STIX (Spectrometer/Telescope for Imaging X-Ray). With this instrument it is possible to observe particularly hot regions that are only formed during solar flares. The rest of the Sun is not visible in X-rays, so STIX needs its own system that precisely measures its orientation towards the Sun. The team at the AIP developed and built the STIX Aspect System (SAS) and now operates it during the mission. This allows the X-ray images to be correlated with the images of the other instruments.

The first images taken by Solar Orbiter from the Sun, which have now been published, reveal previously unknown details. They show numerous small solar flares, so-called "campfires". This already illustrates the enormous potential of the mission, whose scientific phase will begin in November 2021 and continue until 2029.

"All STIX instrument parts, such as the 32 X-ray detectors, worked as expected. We solar physicists at the AIP of course were very excited. To our delight we see that SAS is delivering good data as expected. During the test phase, we were able to see how the diameter of the Sun is constantly increasing as the probe approaches the Sun," explains Gottfried Mann, head of the STIX team at the AIP.

On February 10, 2020, the Solar Orbiter spacecraft was launched. The mission will orbit the Sun in the next few years and approach it to a distance of 42 million kilometres. Solar Orbiter carries six remote sensing instruments and telescopes that image the Sun and its surroundings, as well as four in-situ instruments that measure the properties in the environment of the spacecraft. By comparing the data from the two sets of instruments, science will gain insights into the origin of the solar wind - the stream of charged particles from the Sun that affects the entire solar system.

During eruptions on the Sun, an enormous amount of high-energy electrons are generated. These electrons play an important role because they carry a large part of the energy released during the eruption. The AIP is also involved in the Energetic Particle Detector (EPD). EPD can directly measure these electrons when they hit the probe. Thanks to DLR-funded participation in the STIX and EPD instruments, the AIP will be able to investigate the processes of the high-energy electrons in their entirety in the next few years. Solar activity - also known as space weather - can have a major impact on our climate and technical civilisation. Solar Orbiter aims to study the processes on the Sun and their effects on our Earth. 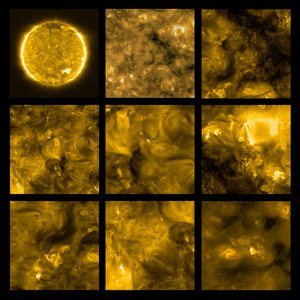 The image shows the Sun’s appearance at a wavelength of 17 nanometers, which is in the extreme ultraviolet region of the electromagnetic spectrum. 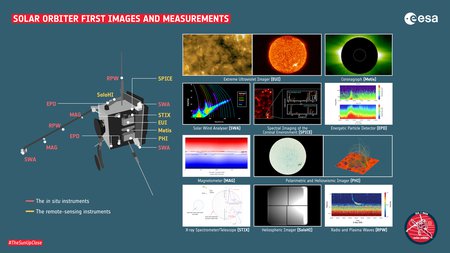 Schematic view of Solar Orbiter with all instruments on board.