An international team of astronomers around Eric Mamajek from the University of Rochester (USA) found out that our solar system had a stellar visitor very rently, just 70,000 years ago.

This inconspicuous red dwarf star was discovered last year by Ralf-Dieter Scholz at the Leibniz Institute for Astrophysics Potsdam (AIP) with its present distance of about 20 light years. Eric Mamajek now nicknamed it "Scholz's Star". During its flyby, this star came as close as 0.8 light years (about 10 light months) to the sun and passed the exterior of the solar system, the so-called Oort cloud. For more details see the links and publications below. 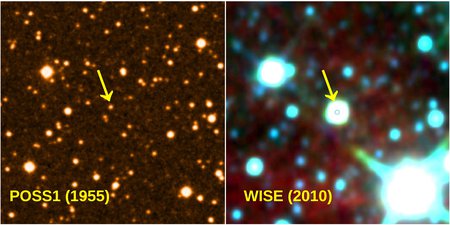 The new solar neighbour was originally discovered in 2014 at AIP using new data of the Wide-field Infrared Survey Explorer (WISE) and astronomical archives of old photographic plates. It hides in the band of the Milky Way, which is overcrowded by many background stars. Typical of a cool red dwarf, it appears much brighter in infrared light. Despite its proximity, it moves rather slowly on the sky (in direction of the arrow). This was a first hint on a possible recent encounter with the sun.