The winner of the competition “Wissen schafft Perspektiven für die Region” (“Science creates prospects for the region”) has been decided: with the German Center for Astrophysics – Research. Technology. Digitization. (DZA), a national research centre with international appeal is being created that will drive forward resource-saving digitization, develop new technologies, provide data transfer and create prospects for the region – all firmly rooted in Lusatia in Saxony.

The DZA is a joint initiative of the astronomy and astroparticle physics communities in Germany. The initiative includes many renowned scientists supported by the major German scientific organizations. The sites will be in Görlitz and in the district of Bautzen. After the construction phase, annual funding of around €170 million is planned for the final expansion stage, and more than 1,000 people will be employed at the centre itself.

Leading the initiative is the designated founding director of the DZA and scientific director of the European Space Agency (ESA), Professor Günther Hasinger. “This competition has opened up new prospects for Saxony and for our society – it is an important commitment to the future at a difficult time. After a demanding one-and-a-half-year process in which our concept was put through its paces, we are happy that we can now implement the project. Lusatia in Saxony is an ideal place for this for many reasons,” Hasinger says. “We would like to thank everyone who has supported us and look forward to future collaborations.” Professor Matthias Steinmetz, spokesman for the Executive Board of the Leibniz Institute for Astrophysics Potsdam (AIP), adds: “Astronomy has always been a high-tech science. The technological challenges that the DZA will work to solve are highly relevant for the regional economy, both for small businesses as well as for large industries.”

Progressive vision glasses, ceramic glass cooktops, essential components of mobile phones, navigation systems or fast electronic bank transfers via satellite – all this is possible thanks to astronomical research. Astrophysics is currently experiencing a real “boom”. Half of the Nobel Prizes in physics in the past decade were for astronomy, astrophysics and astroparticle physics. Astronomical measurements today are fundamentally different from the astronomy of earlier times. Modern telescopes are huge facilities, spread all over the world, with international collaborations working on them. They are located in the Chilean highlands, in the vastness of Australia, and deep in the ice of Antarctica. They require the most precise measuring techniques, and the data that new observatories will collect is many times the size of today's internet. In the future, data from all over the world will converge in Saxony, creating the largest civilian data set in the world. The DZA is thus faced with challenges that are also socially relevant, for forecasts predict that IT will soon consume 20 per cent of global electricity production. The DZA wants to take on these challenges, promote green computing and resource-saving digitalization, and develop new technologies for tomorrow's society.

Prospects for the region

Many examples show: astronomical research changes regions sustainably. With its unique combination of research and development in IT, sensor technology and materials research and its need for production facilities, the DZA will provide economic impetus and create at least 3,000 sustainable jobs at the centre and in the surrounding area. The DZA's portfolio is diverse, offering jobs in the scientific field, but even more so in the non-scientific field. With a Centre for Innovation and Transfer (ZIT), the DZA is breaking new ground in the cooperation between research and business. Through early, close cooperation with industry, universities and non-university research organizations, new technologies will be jointly developed. Through international visibility and networking, the DZA aims to attract skilled workers and create prospects for young people in the region. Cooperation partners are the universities, above all the TU Dresden, and companies in technology development and data processing. More than 50 mainly small and medium-sized companies have also supported the DZA's initiative. For Germany as a science location, its foundation is also of strategic importance. The DZA will ensure access for German science to future large-scale international projects and thus also open up opportunities for industry to participate in tenders.

Seismic waves pass continuously through the Earth's surface. For gravitational wave detectors, they cause considerable interference. Particularly calm geological conditions are therefore also necessary for the development of measurement and production technologies. The DZA will use the unique seismographic conditions in the granite rock of Lusatia for its research and development of new devices. An underground research laboratory, the Low Seismic Lab, is to be built here in an area between Hoyerswerda, Bautzen and Kamenz, which will also be available for industrial applications, such as the development of quantum computers.

The city of Görlitz is an excellent location for the DZA due to its proximity to the university cities of Dresden, Wrocław, and Prague and due to the promising new settlements in the innovation and high technology sector. Here, an open campus for cutting-edge research is planned at the Kahlbaum site, embedded in the city, with the centres for astrophysics and data science, the technology centre, and the centre for innovation and transfer. A visitor park is also part of the concept.

The funding provides for a three-year set-up phase before the centre can be formally established. The TU Dresden will take over the project management during this period and will also be involved with its expertise in the fields of data analytics, artificial intelligence and high performance computing. A planning team is to start promptly with offices at the Kahlbaum site in Görlitz and at the Low Seismic Lab in the district of Bautzen.

What the co-applicants say

“Astronomy is currently opening new windows to our cosmos that not only fascinate the scientific community, but also, by driving technology and innovation, have the potential to change our world.”
Prof. Dr. Michael Kramer, Director at the Max Planck Institute for Radio Astronomy and President of the Astronomical Society

“A national centre for astrophysics was missing in Germany. It is a great gain for the German scientific landscape with international appeal. It is good that it is being established in Eastern Germany.”
Prof. Dr. Christian Stegmann, Director of Astroparticle Physics, Deutsches Elektronen-Synchrotron DESY, Head of the Zeuthen Site

“TU Dresden will be a strong and capable partner for the DZA. Together, we will not only break new ground in digitization with intelligent data analysis, but also develop new technology solutions with green computing and the Low Seismic Lab, thus providing important economic impulses that will benefit not only astronomy but also society.”
Prof. Dr. Wolfgang E. Nagel, Director of the Center for Information Services and High Performance Computing, Dresden University of Technology

“The DZA will become a globally visible centre in the young field of gravitational wave astronomy and play an important role for German astrophysics in future large-scale projects such as the Einstein Telescope.”
Prof. Dr. Michèle Heurs, Leibniz Universität Hannover

“Astronomy inspires. We cannot arouse interest in STEM subjects early enough. From daycare centres to school labs, continuing education for educators to programmes for trainees and young scientists, we are focusing on education.”
Prof. Dr. Stefan Wagner, Landessternwarte Heidelberg and Professor at the Center for Astronomy at the University of Heidelberg 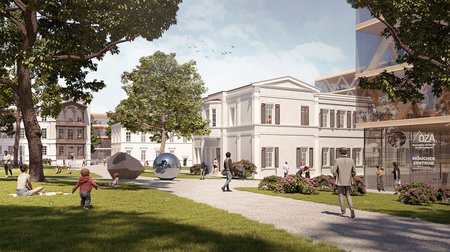 Visualization of the centre.